On receipt of the notification for handing over of 151 trains and some stations to Private Parties, AIRF registered its protest and both the Federation had boycotted the meeting of DC/JCM scheduled to be held on 26th December, 2019. Subsequently the meeting of DC/JCM was held on 16th January, 2020 when Shri Pijush Goyel, Minister for Railways and Shri V. K. Yadav, CRB also attended…….

On receipt of the notification for handing over of 151 trains and some stations to Private Parties, AIRF registered its protest and both the Federation had boycotted the meeting of DC/JCM scheduled to be held on 26th December, 2019. Subsequently the meeting of DC/JCM was held on 16th January, 2020 when Shri Pijush Goyel, Minister for Railways and Shri V. K. Yadav, CRB also attended.
The Minister gave a categorical assurance that without having any discussion with the Federations, no step in this regard will be taken. But the Govt. of India vide its notification dated 1st July, 2020 had issued RFQ, calling Tender for running of 151 Trains in 109 routes. The relevant portion of the Notification (copy enclosed), which states as under: a)”Train shall be designed for a maximum speed of 160 KMPH. There would be a substantial reduction in journey time.
The running time taken by a train shall be comparable to or faster than the fastest train of Indian Railways operating in the respective route”. (Para – 5) At present Taj Express running from NDLS to Jhansi and Gatimaan Express are running from NDLS to Agra is having a maximum speed of 160 KMPH. So 160 KMPH speed we have already achieved and this is nothing new. In this connection, it is further mentioned that all Rajdhani Express trains are running with a maximum speed of 130 KMPH.
But due to track condition, non laying of double line etc. the Rajdhani Express train running from NDLS to Dibrugarh with a permissible maximum speed of 110 KMPH within N. F. Railway i.e. from Katihar to Dibrugarh. This Rajdhani Express between NDLS to Dibrugarh has been introduced in the year 1997 and after 23 years the route can bear a maximum speed of 110 KMPH. So it is not understood how within 2-3 years time, the 110 KMPH will be upgraded to 160 KMPH within N. F. Railway. Similar is the position of Satabdi Express, fit to run with a maximum speed of 140 KMPH. But the same could run only 110 KMPH in N. F. Railway. (The maximum speed of other Railways for these two trains may please be ascertained from different Zonal Railway Unions or time table).

b)“The objective of this initiative is to introduce modern technology rolling stock with reduced maintenance, reduced transit time, boost job creation, provide enhanced safety, provide world class travel experience to passengers and also reduced demand supply deficit in the passenger transportation sector” (Para – 6) It is stated that this will boost “Job Creation”. It is not understood how the additional jobs will be created for running the trains. Regarding enhance safety, world class travelling experiences etc., it is pointed out that in the Indian Railways Year Book (2017 – 2018) at Page 34 & 35 (Xerox copies enclosed), it has been claimed that interior of coaches are being improved and they are running in Mahamana Trains. It is also stated that World Class coach interiors have developed for newly manufactured 500 LHB Coaches. So, either the statement furnished to the country through Budget Papers are misleading or the same has been highlighted for handing over of trains.

2. Freezing of Dearness Allowance The Dearness Allowance was first sanctioned w.e.f. 01.04.1941 during 2nd World War when the prices of all essential commodities were going high. This has been improved from time to time through different representations, struggles and ultimately the matter of 100% neutralisation for all Non Gazetted staff was considered by the 4th Pay Commission and the same has been granted w.e.f. 01.01.1986 and since then the same are being paid. Similarly the Dearness Relief was also paid to the Pensioners / Family Pensioners. Taking the advantage of COVID – 19 situation, the Govt has taken an unethical decision to freeze Dearness Allowance for a period of 18 months from 01.01.2020 to 30.06.2021, meaning thereby serving employees will loss 1 month & 7 days wages after working 18 months. The same is also for Pensioners / Family Pensioners.

3.Sermon issued by FC, Railway Board on 19.06.2020 through DO letter addressed to all GMs putting ban in recruitment, ban in creation of post, review of all pending indents of RRBs, meaning thereby stoppage of recruitment. Outsourcing of on board services, reduction in PRS counters, closure of uneconomic Branch lines, reduction in man power through multiskilling etc.

4.Regarding multiskilling, the Railway Board had appointed a committee unilaterally, the report of the unilateral committee was published in a Booklet in the year 1969. The same was protested by both the Federations and the Booklet was shelved. Joint Committee in the style and name “Railway Worker’s Classification Tribunal – 76” under the Chairmanship of N. N. Tendon, Ex. Member (Mechanical) was set up with both Labour members one from AIRF and the other from NFIR. The Committee has submitted its recommendation and the same has been implemented. So if, there is a need to go into the matters, an Adhoc Tribunal of similar nature under the PNM Scheme may be set up and Railway Board should not proceed with for an unilateral action.

5.The Railway Board in their subsequent letter dated 02.07.2020 interalia directed for surrendering of 50% vacancies.

It may be stated that since long each and every post whether in Safety or non safety is created with proper justification of work load, availability of finance, passing through different authorities of Personnel Branch, Accounts and Administrative Branch. The COVID – 19 situation is a temporary face. We shall overcome from this situation and normal Goods, Passenger and Parcel trains will put into commission. It may be pointed out that in normal time, Trains are moving with more than 100% passengers as per capacity. The posts are lying vacant not because of there is dearth of work. The vacancies are due to work load thrust upon RRBs / RRCs without providing man power. So due to administrative failure the posts could not be filled up and the existing staff are to bear the brunt of excess workload but fear this sort of matter can continue. The number of lying vacancies leads to 2.5 lakhs. It is pertinent to mention that the Constitution of India has been amended and Labour Participation in Management has been included in amended Article 43 A, which states as under: “The State shall take steps, by suitable legislation or in any other way, to secure the participation of workers in the management of undertakings, establishments or other organizations engaged in any industry”. The Railway Board have introduced Corporate Enterprise Group (CEG) in the year 1972, now renamed as PREM and this has been extended to the Zonal Railways and Divisions by an order of the Railway Board in the year 1977. So the body is having Constitutional back up. But keeping the same body of PREM suspension in animation, decisions are being taken unilaterally by the Railway Board and Railway Ministry and Govt. of India, specially where Labour is effected without having any formal discussion. This design we vehemently protest. There must be full dress discussion. All the matters be kept in abeyance till they are fully discussed.

Resolution adopted during the General Council Meeting of AIRF held at Kota on 17.02.2014 in connection with the 36 Point Charter of Demands. 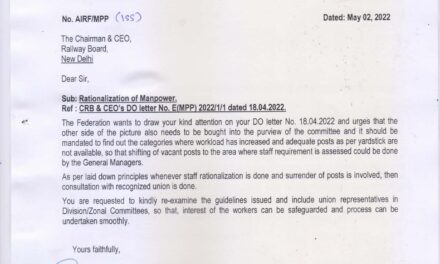 RATIONALIZATION OF MANPOWER – AIRF’S REFERENCE TO RAILWAY BOARD